Dr. Backus is passionate about providing excellent patient care and has an insatiable desire to learn. He finds great satisfaction in providing thorough, comprehensive medical care. He deliberately schedules fewer patients with longer appointment times in an attempt to provide a relaxed atmosphere and to allow time to adequately address patients concerns.

Dr. Backus grew up in Seattle, Washington and attended Nathan Hale High School, where he was valedictorian and student body president. He received bachelor’s and master’s Degrees from Stanford University, graduating with honors in 1989. He completed medical school at Duke University, where he published a peer reviewed basic science paper, and won an AOA (medical honor society) presentation award. He completed his residency at the University of Washington in 1996 and then began private practice in Cheyenne, Wyoming. After practicing in Cheyenne for 3 years, he pursued locum tenens and volunteered medical services to residents in Nepal. He moved to Bend in 2000, practiced at Bend Memorial Clinic for 6 years, and then founded Cascade Internal Medicine Specialists with Dr. Jeff Absalon. In 2008, he was honored to be elected a Fellow of the American College of Physicians. In 2014 he received a national award for blood pressure control, and later became a nationally certified Hypertension Clinician. He continues to educate local and regional physicians on Hypertension.

He immensely enjoys his three young children. Family time is very important to him. When he finds himself with free time, he enjoys his family, girlfriend, and/or a variety of hobbies, including fly-fishing, mountain biking, skate and downhill skiing, chess, and playing violin in his Celtic band “Til the Wheels come off”. 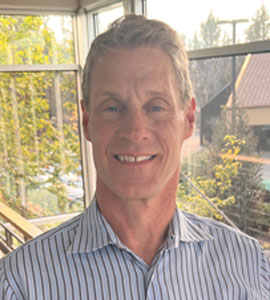